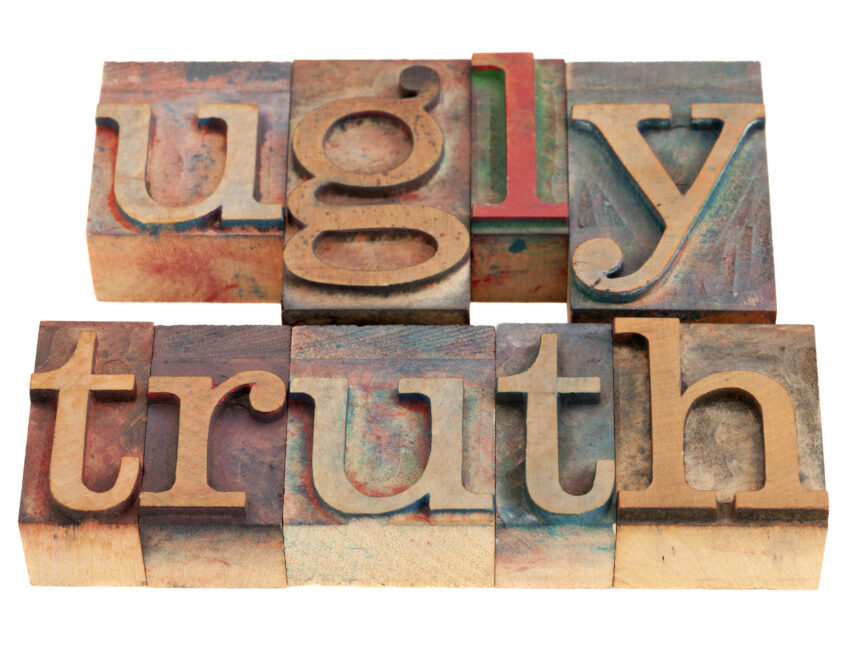 We can either accept “the ugly truth” of politics or we can choose a more beautiful truth. The choice is ours.

Plato once declared, “The price of apathy toward public affairs (what we call politics) is to be ruled by evil men.”

Sounds rather ominous. We will dissect the “evil men” part later (we addressed some of this in Part 1), but the “being ruled” part is something which concerns us all.

Plato softened his harsh, evil-men sentiment with another observation, “One of the penalties for refusing to participate in politics is that you end up being governed by your inferiors.”

Napoleon Bonaparte carried Plato’s claim further determining, “In politics, stupidity is not a handicap.” Something you are all too aware of if you have been keeping up with politics in America these last number of years.

Plato’s highlighting the idea of “inferiors governing” is not quite as ominous as evil men, but still, it should cause us to consider we shouldn’t leave this “governing thing” up to others, unsupervised. If we do not pay attention, if we do not play a part, if we do not say something and do something, there is no telling where we could end up.

As Plato suggests it may not be so great a place.

We already considered a definition of politics.

The word itself – politics – originates from the Greek politika referring to the “affairs of the city,” the city-states of ancient Greece.

At a macro level politics is defined as activities associated with governance. Or further, governance of a country or any other place by making decisions in groups or through forms of power relations, resolving conflicts among individuals or parties having or hoping to achieve power. Achieving power is attaining status or influence or gaining control over resources and people.

Said another way, politics comprises all the activities of cooperation, negotiation, and conflict within and between societies, whereby people organize, use, produce or distribute human, natural and other resources to sustain physical and social life.

Some think of politics as a distinctive form of rule whereby people act together through institutionalized procedures to resolve differences, reconcile diverse interests and values, and make public policies in pursuit of common purposes.

Or as Ernest Benn once said (often attributed to Groucho Marx), “Politics is the art of looking for trouble, finding it whether it exists or not, diagnosing it incorrectly, and applying the wrong remedy.”

On a micro level politics may be defined as the use of power to determine who gets what, when and how. Some, notably Vladimir Lenin for one, consider politics the most concentrated expression of economics. Others argue that at the root of all politics is conflict. One commentator notes: Politics is about the characteristic blend of conflict and cooperation found so often in human interactions. Pure conflict is war. Pure cooperation is true love. Politics is a mixture of both.

As realists Machiavelli and Hobbes suggest – politics is the use of power, irrespective of the ends pursued; including the use of intrigue or strategy to obtain power in public or private spheres.

I now draw a distinction which over-simplifies, but please bear with me.

In virtually any aspect of life we can usually define extremes: hot – cold, light – dark, good – evil, and so on. Life for most of us however, happens not at the extremes but in the gray area in-between. Life is lived on the spectrum, the continuum somewhere between the extremes.

Politics is fundamentally about seizing, wielding and maintaining power. On a micro level this is power an individual has over another. At a group level it is power over others. And on a societal level, it is power over all.

The U.S. Declaration of Independence asserts: “We hold these truths to be self-evident, that all men are created equal, that they are endowed by their creator with certain unalienable rights, that among these are life, liberty and the pursuit of happiness.”

All people have desires; to go places, to do things, to have things and to control things. But all people do not have the same capacity, the same desires, nor do they act in exactly the same way.

Human beings naturally and quite automatically compete for what they want – competing is the way of nature.

Politics is not terribly complicated.

The ugly truth: politics is a power game.

Wherever there are people there is politics – the struggle for, use and potential abuse of power. The fundamentals of the game are everywhere and always the same.

Despite all we know about human society and the potential for us to achieve greatness collectively, the ugly truth about politics is that most often politics is simply a competition for power. Rarely for all. Sometimes for many. Usually for few.

Most commonly politics becomes the struggle to gain, wield and hold power for the benefit of a few.

Are you familiar with the book: All We Really Need to Know We Learned in Kindergarten?

If we learn the wrong lessons in kindergarten, we just compete. The best, most effective competitors seize power. The rest are vanquished or submit. Ultimately we all suffer. We never reach our true potential. Because to achieve our true potential everyone must contribute. Us reaching our potential depends on the contributions of others. A domineering power-dynamic, lessens the collectives’ potential.

Politics – the obsession with power – most often becomes the art and science of taking from the many to enrich the few.

The nature of power is to corrupt. So let us consider nature once more…

Let me know what you think in the comments section below. Look for Chapter 11 – It’s A Jungle Out There next Monday. All the best, Scott