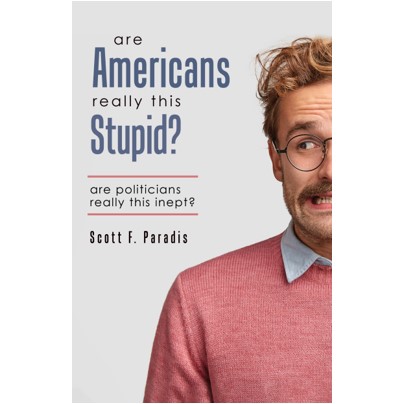 Over the next nine weeks (twice per week – Mondays and Thursdays) and before the book is published/released I will post the chapters of my latest work: Are Americans Really this Stupid? Are Politicians Really this Inept? on this blog.

It seems two things happen as societies advance (like the United States had after World War II). First: Power Corrupts; and Second: Wealth Breeds its Own Discontent (the advantage of privilege nurtures the sentiment of “Getting Something for Nothing”). Are Americans Really this Stupid? explores why Americans are willingly discarding our blessings and instead of connecting, collaborating and creating are choosing to divide, blame and fight. Competing instead of creating never leads to a prosperous destination.

Here is an overview of of what to expect over the next nine weeks:

One worldview dominates the human epic: the “law of the jungle,” “survival of the fittest,” “might makes right.” This look-out-for-number-one, me-first attitude is humanity’s default operating paradigm. But the truth is, society only prospers when people connect, collaborate and create together. Politics is our means of coming together.

Look out for the first installment this Thursday and let me know what you think.

I appreciate the honor of having a few minutes of your time and attention. I hope to provoke your thinking with these insights.