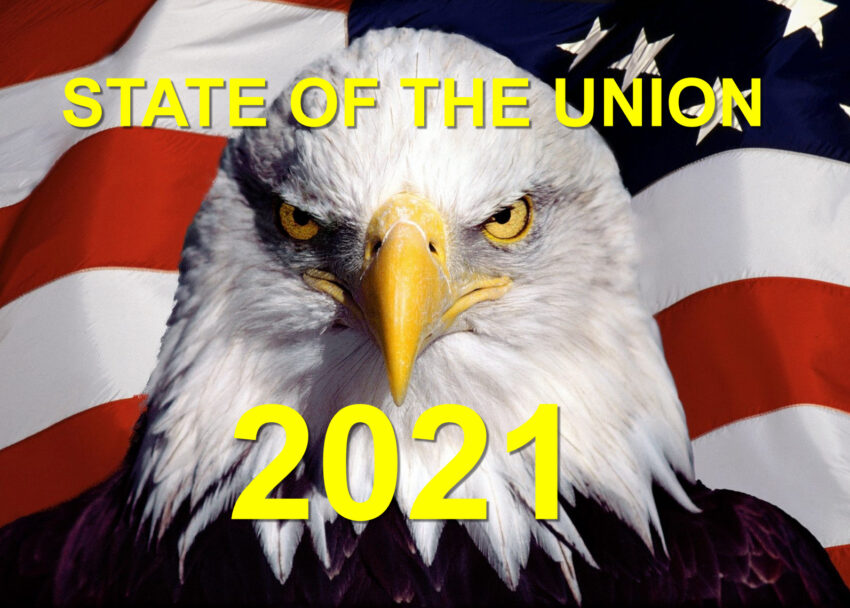 Welcome to the State of the United States 2021.  I’m Scott Paradis.

While a new administration rightly calls for civility; I’m here to tell you the unvarnished truth about the state of the union.

We have dug ourselves a deep hole and we’re still digging.

These are dark days in the United States of America; not brought on by an outside power; a foreign invader; no, rather we are experiencing rot from within; an assault on truth; fear and hate on a national scale.

My bias is toward the people.  It is us, we the people who let this abuse happen.  Delusions, fear and hate dominate American politics.  Through ignorance and selfishness we have cast a once great nation, an aspirational nation, a nation founded on inspiring ideals, into a dismal state.

We Americans love to wrap ourselves in the flag and say how great we are.  We’re number one.  I think it’s time you heard; we’re not number one in any category anyone should aspire to be number one in.

The corona virus debacle and an attack on democracy perpetrated by a sitting president, a political party of enablers and a hateful mob speaks for themselves.  Now beyond the obvious…

We have accumulated more debt than any nation in human history.  We’re closing in on twenty-eight trillion, that’s trillion with a “T”, dollars of federal debt.

Debt is a tax on the future; play now – pay later.  I know, we Americans say; it’s not a tax we will have to pay – it’s on our kids and grandkids; too bad for them.

Add state and local government debt and pile on an additional five trillion.

But wait you say, that thirty-three trillion and counting is government debt – that doesn’t matter.  Our personal debt – things like credit cards, auto-loans and student loans amount to another sixteen trillion.  And I haven’t even mentioned corporate and financial debt and unfunded obligations.  Debt is a ball and chain.  Play now; pay later.  We’re number one.

Finance; what once was a supporting component of the economy – enabling the real economy: infrastructure, transportation, communication, energy, manufacturing and so on; finance now comprises one fifth of the U.S. economy.  And it’s a closed system. We print money as fast as we possibly can to further enrich the few.

We are running a trade deficit in excess of eight hundred billion dollars a year; print more money, get more stuff.

While the government reports unemployment hovering near seven percent we now have more than one hundred million able-bodied American adults sitting on the sidelines outside the labor force.

The government tells us annual inflation is near one percent; the real inflation rate; for things you actually need and buy exceeds ten percent.

We have forty-five million American families on food stamps.

Two out of three American adults are overweight or obese.

One in three American adults are addicted to poisons – cigarettes, drugs and alcohol.

We use more drugs in America for everything from recreation to weight loss to stress relief to actually treating disease than any other country.

Our health system represents close to twenty percent of GDP.  On a per capita basis we spend more than every other developed nation in the world by a wide margin. And except in a few areas we get terrible results.

Our healthcare system itself, in a normal non-pandemic year, is the third leading cause of death in America.  Life expectancy is on a downward trajectory.  Suicides and deaths of despair are growing at alarming rates.

Right now the United States has more than two million three hundred thousand men, women and children behind bars.  We account for nearly one quarter of all imprisoned human beings on the planet.

On a Freedom Index ranking all countries based on such factors as rule of law, security, rights, sound money and so on; the United States doesn’t even break the top fifteen.  We’re doing great.

Recently Transparency International a global coalition against corruption ranked the United States as twenty-third; in the neighborhood of Bhutan and Chile; more corrupt than the United Arab Emirates.  And we’re sinking in those rankings fast.

If that isn’t enough; now the big one…

Healthy, productive, prosperous relationships, communities and societies are built on a foundation of trust.  With an assault on truth, the United States, at home and abroad, ranks among the least trusted and trustworthy of all major nations in the world.  Less trustworthy than China, India, and Saudi Arabia by a wide margin and even Argentina.  We are rolling in the muck with such stalwarts of trust and integrity as Russia.

Plato observed, “Whatever deceives men seems to produce a magical enchantment.”  America is certainly enchanted as it is greatly deceived.

Thirty years ago I read a prediction that the United States would stand alone as a pariah nation on the world stage.  I didn’t believe it; but now here we are.  Welcome to America in 2021.

We, these United States are in a mess, a mess.  The state of our union is precarious at best.

Americans fundamentally misunderstand politics: unless we carefully guard against human nature, politics always becomes a game of taking from the many to enrich the few.

Awash in lies the many are easily deceived and pitted against one another.  Divide and conquer is the political strategy; fear and hate are the political weapons.

Every man for himself; people gladly jump on the fear and hate victim bandwagon; it gives them someone to blame.

There it is.  There’s the unvarnished truth.

The decline of these United States is accelerating because of us – because we the people refuse to see what’s happening right before our eyes.  Instead of facing the fact that succeeding is up to us – all of us together; we play the victim and run from responsibility.

We forfeit our power; we give it away; because the responsibility of power is too great for most of us to bear.  We give power to the bold so we don’t have to be responsible – we can blame someone else.  Making America great again.

Much is required to fix America; to get us on the right track; but progress hinges on us.  The enemy is not THEM; ‘people who don’t look like me and sound like me.’  The enemy is within.

We need to open ourselves to grace; we need to rebuild trust.  If we can trust each other enough to come together we can figure this out.

First we must get off the fear and hate victim train.  We must stop clinging to delusions feeding self-righteous hubris.  People who see things differently are not your enemies.

A functioning democracy requires moral, educated and informed citizens.  We are falling short.

We lack the courage and conviction to shoulder personal responsibility and be worthy of trust.  If somehow, we can become trustworthy; and if we can trust; together we can do anything.  That anything we must do is redistribute power.

Politicians are hired by a few to consolidate power for those few.  Our politicians do an extraordinary job.  They have no interest in changing a system they are succeeding in, so I propose: A constitutional convention to fundamentally reshape public service and redesign our election process.  No more career politicians who are easily bought and paid for by corporate interests.

And, and we must fundamentally reform our corporate system.

Malfeasance abetted by legal but corrupt corporate practices allows the powerful to pillage and plunder anonymously at will.  We must stop the few from stealing from the many.  Democracy only works if we empower the people.

The United States of America was founded on ideals of freedom, justice and opportunity, equal treatment under the rule of law.  Those ideals mean nothing if we all don’t have a stake; if we don’t do our part and if we don’t have a common view of reality.  Trust is broken; the result of political misdirection to concentrate wealth and power.  It’s as simple and as complex as that.

Civility would be a good start; but America’s politics and politicians are entrenched.  Every administration and every congress continues to play musical chairs with disastrous results.  If we are interested in saving these United States we must do something bold and we must do something now: change ourselves, then purge the corruption.

I believe in my heart, as difficult as bearing personal responsibility may be; Americans can, can and will step up to the challenge.

We know nations prosper when many share the burden and the benefits, yet our system has evolved to enrich the few at the expense of the many.  I’m suggesting something really radical: to actually think; to be honest and truthful; and stop the charade of lies and deceit.  Enough.

We need people who can and will think; people with the courage to bear the burden of responsibility and stop blaming the powerless.  If you really want America to be great again; don’t expect politicians to fix things.  It’s not going to happen.  Of the people, by the people, for the people; it’s up to us to change.  Saving America requires we change.

We must gather the courage to claim and use our power, not for wealth and privilege like the elites but for good.  We must act and act together.

If we don’t act; if we don’t come up with the courage to connect and collaborate; to trust; to remake this fragile democracy; then it’s not: May God bless America; it’s May God have mercy on us all.

PS If you think other people need to hear this, please share this.  Mine is a voice in the wilderness.  I need your help to amplify this message.